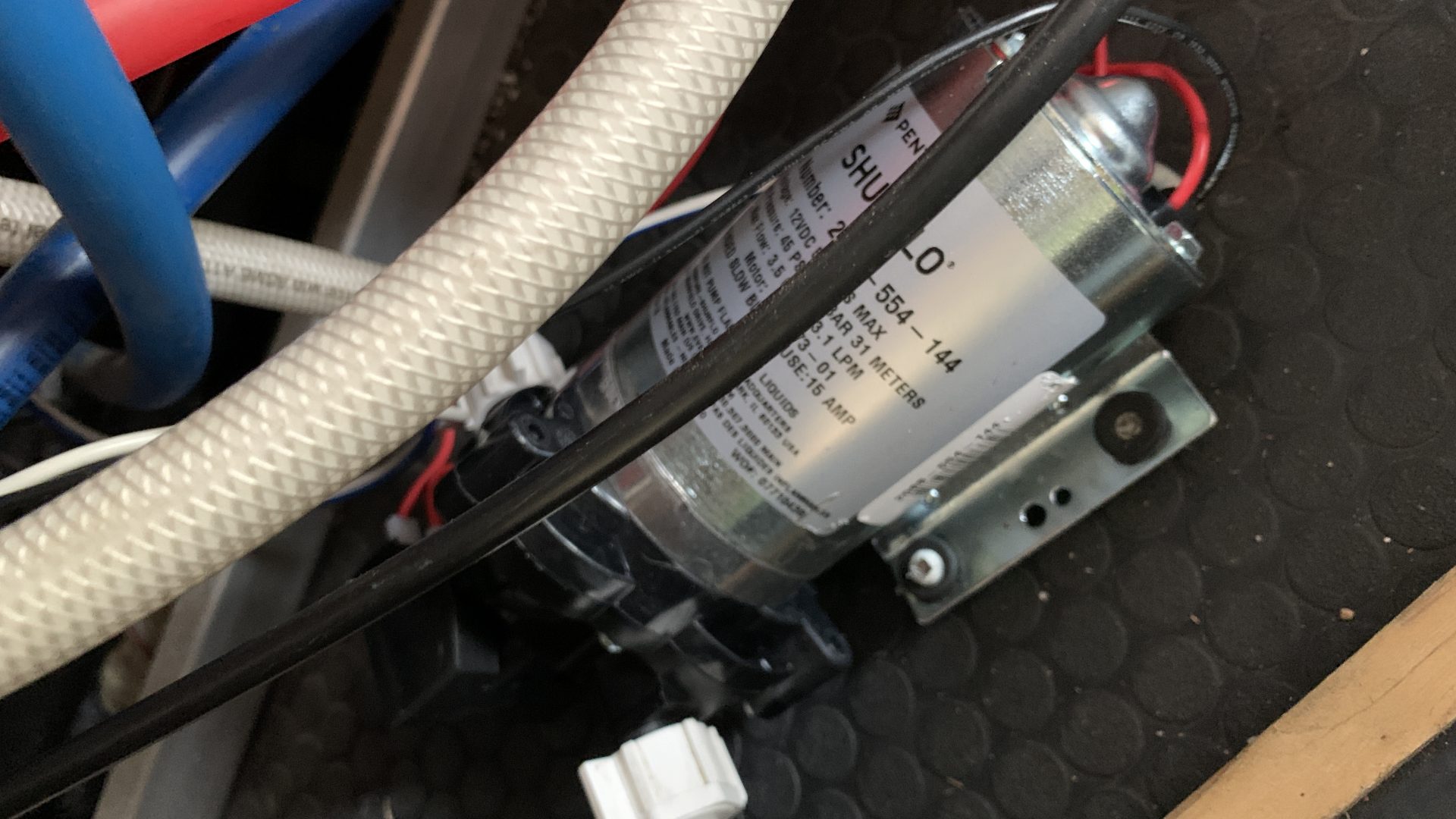 We’ve had some septic collecting at the outlet of the RV for several years, something that I really should have had fixed under warranty when we bought the unit. I don’t remember how it started out, but recently, I thought it was all grey water, and getting worse. We’ve been catching it with an add-on gate valve and cap.

After our recent camping trip, I decided to tackle the problem and fix it before heading out on the road – I was getting tired of accidentally dropping wastewater (or worse) on the ground, and occasionally getting it on me. So I ordered a few parts:

I used the macerator pump, hose, and adapters to rig up a solution to drain the tanks directly into the clean-out drain at home. It’s something that I’d like to keep – it works really well, and allows us to empty the tanks into non-conventional places. If we’re driveway camping, for instance, we still have a method to empty the tanks as long as we’re within 100ft of a cleanout.

I started the project by adding a bunch of water with food coloring to the tanks – each tank with a different color – and waiting to find what color leaked out. Unfortunately, of the four tanks, I found three different colors at the output valve. Two gray tanks with major leaks, and a smaller leak on the master bathroom black tank.

I then removed the Coroplast underbody and the insulation, and cut off all the spray foam that was keeping the pipes sealed and stationary. After emptying the tanks, I started working on the grey tanks first. The master grey seals were clobbered in dog hair and unable to seat fully – which makes sense, since we have bathed the dogs in the shower on several occasions. We’ll have to get a proper hair trap and actually use it.

The downstairs gray tank seal was also a mess of hair, which is more of a mystery. It is fed by the kitchen sink and the downstairs bathroom sink which we rarely use, so I assume over time we’ve washed enough stuff in the kitchen sink with small amounts of dog hair that it collected enough at the seals to become a problem.

The blank tank seals were perfectly fine – but the cable was not cut to the right length, preventing it from seating properly. I believe this was always an issue, one that I should have had fixed while it was still under warranty. I went ahead and replaced the seals while I was in there. I also confirmed my suspicion that one of our valves labeled “Grey Water” was actually actuating a black tank, something I’ve figured upon for years.

The whole project took far longer than expected because the scope of it blew out of proportion once I started working on it. Even with the tanks flushed several times prior to opening, it wasn’t a pleasant job and one I hopefully don’t have to deal with again for many years.

I used a liberal application of Molykote 111 on each of the seals before assembly.

I filled the tanks with water and let them sit overnight before sealing up the underbody, and was happy to find that there was no leakage at the outlet the next morning and moved onto reassembly and sealing the underbody with spray foam.

I found one last issue: once I had everything put back together, the master black tank valve would not actuate and the cable sheath had pulled loose from the handle assembly. I attempted to fix this by drilling and tapping the assembly with screws to hold onto the plastic sheath, but they ripped the sheath after a few actuations so I found some small worm clamps and garden wire. I ran two short lengths of wire through the clamps, putting two clamps on the sheath and two on the assembly, then twisted the ends together so that the sheath was held in place by the clamps and wires rather than by the assembly itself. This worked for several actuations and will probably outlast all the other valves with their factory assemblies, plus it’s hidden behind the wall so the “southern engineered” fix won’t be seen.