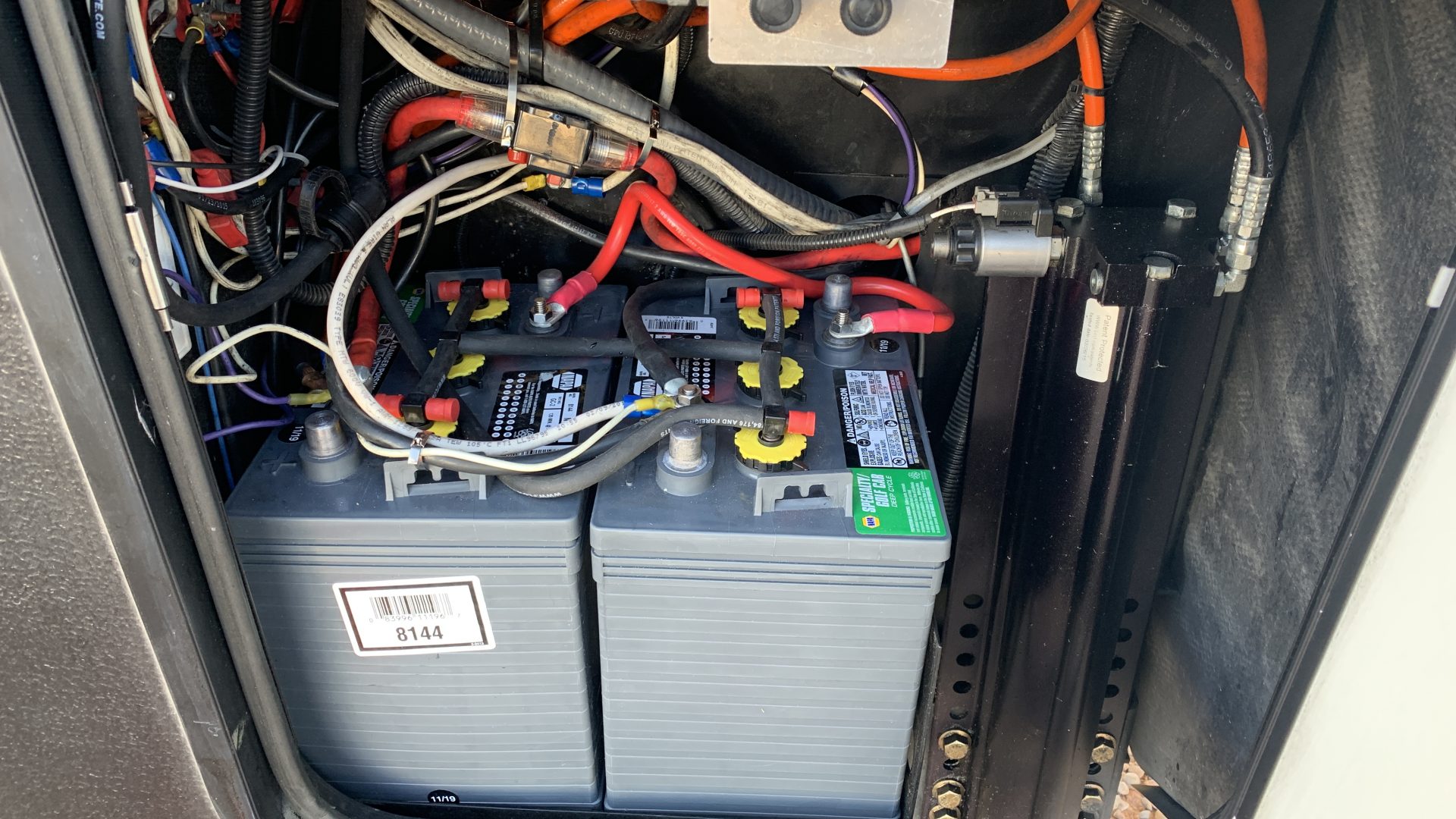 We’re heading to Lake Havasu in January, for a week of dry camping. We haven’t done much of that, and the little we have has consisted of running the generator constantly and filling propane tanks each day. We don’t have many plans to dry camp, but we are not sure how much that will change and would like to be better prepared.

Our rig came with a single 12v group 27 battery which we’ve had to replace once. A very common RV mod is to replace the 12v hybrid starter/deep cycle battery with a pair of 6v true deep cycle golf cart batteries. Since battery power is preferable to generator power, I went down to NAPA and bought a couple of their model 8144, 230AH batteries. Wiring two of them in series provides 230AH since you double the voltage but the capacity remains the same. That is a nice increase over the single 105AH battery and will stand up to a lot deeper discharge cycles.

I’ve never been great about battery maintenance, either, so I went ahead and ordered a watering kit. You just dip a tube in a jug of distilled water, squeeze a bulb a few times, and your batteries are topped off. I’ve habitually only filled water a couple times a year, but this makes the process a lot quicker and simpler so I’m more likely to stay on top of it. It’ll be an item on a monthly checklist I’m assembling.

The WFCO charger that came with our RV isn’t going to work well with these batteries and would ultimately shorten their life, so I ordered a new Progressive Dynamics unit that has been modified to bulk charge at 14.8v and supports equalization.

I was pleasantly surprised to find that the battery tray seemed perfectly designed for these two GC2s – it’s almost like they intended this mod from the factory, but as far as I am aware no factory RV comes with them. Battery weight more than doubles, with these weighing in at 64lbs a piece.

When we installed the residential fridge, I grabbed a used Xantrex XM1000 inverter and wired it into the “General” 15A breaker of our distribution center. The inverter passes through shore power and supplies inverter power whenever shore power is cut. It’s the same inverter that Keystone installed with the residential fridge option, so I thought it would be a safe choice… however, it randomly seems to throw error E05, which is output overload, and shuts itself down requiring manual reset. Whether that is because it is a used, older inverter that may have some issues or because it is truly being overloaded, I’m not sure, but needed to remedy it.

I began looking at inverters that could power the entire rig off battery with the two 50A legs, and there are only a couple of them on the market. I mulled over them for a while, but ultimately decided not to spend the money. The one that I would have bought is the Magnum MSH3012RV, with a few accessory modules, coming in at nearly $2600 after Black Friday discounts. It provides a ton of great features that would allow us to easily boondock off a bank of four or more batteries and the generator for as long as our tanks would allow us, but those tanks are also our downfall. As runners who run six or more miles each day, we like our showers and just don’t see a ton of dry camping in our future– at least, not enough to justify the cost. So looking back at the inverters, I bought an AIMS 2000w PSW unit that I can fit in the place of the Xantrex I installed.

We’ll be limited by this approach by the fact that the inverter will only supply power to one circuit – the one that powers our refrigerator and entertainment center. To run any other outlets or our microwave, we’ll have to start the generator. That isn’t the end of the world, really, with as much use as we’ll probably have, but we’ll be running to get propane filled a lot more often which will take away from the dry camping experience.

I did run some numbers, and found that we’ll need more battery capacity than the two batteries will provide even with this setup, if we want to limit generator use to a couple hours a day.

Our residential fridge estimates annual usage at 613kWh. Taking that, we can figure it uses 613kWh / 365 days, or 1.679kW/day, which *1000 is 1679w. 1679 watts / 12 volts = 139.916 or roughly 140ah per day just to run the fridge. Since the inverter is only about 90% efficient, we can multiply that by 1.1 to get a more realistic estimate of 154ah. The inverter also draws around 36ah just to be powered on according to the spec sheet, so between the refrigerator and inverter we’re using 190ah before even turning on a light or fan anywhere. Our Cradlepoint AER1600 should use around 28ah to run, which we use for Internet, and lets assume we average 20w for lighting all day, burning 40ah of capacity.

Our two batteries provide 230ah, but the caveat is that you don’t want to regularly discharge them below 50%. That provides us a more realistic usable capacity of 115ah, which is far short of the 295ah we’re going to be using at minimum, so we’d need to top off the batteries more than twice a day.

Adding another two batteries in our basement storage will double our usable capacity to 230ah, with a full reserve of 460ah, which gets us closer to one day of utilization before the generator needs to kick on for a few hours to charge the batteries. This is all assuming we’re staying in a moderate climate with no need to run the furnace, electric heat, or A/C – something we can attempt as full-timers, but not something that can be guaranteed. We’ve ordered a sealed enclosure for those batteries and will be venting it to the outside.

The Onan EC-30 generator control that I installed a while back has the ability to automatically start the generator based on battery voltage, so we’re going to set it to start at roughly 50% discharge.

All of this being said, it’s very tempting to buy the Magnum inverter. Not only is it capable of providing inverter power to the whole RV, it can charge the batteries in less time, manage the generator auto-start more efficiently, and allow us to do things like supplement insufficient shore power with battery power — allowing us to run the AC, for example, when just plugged into a household outlet as long as we’re not outrunning the battery capacity. But that comes at a very steep price even with the massive discounts they are offering, and I just don’t think we’ll use it enough to justify.