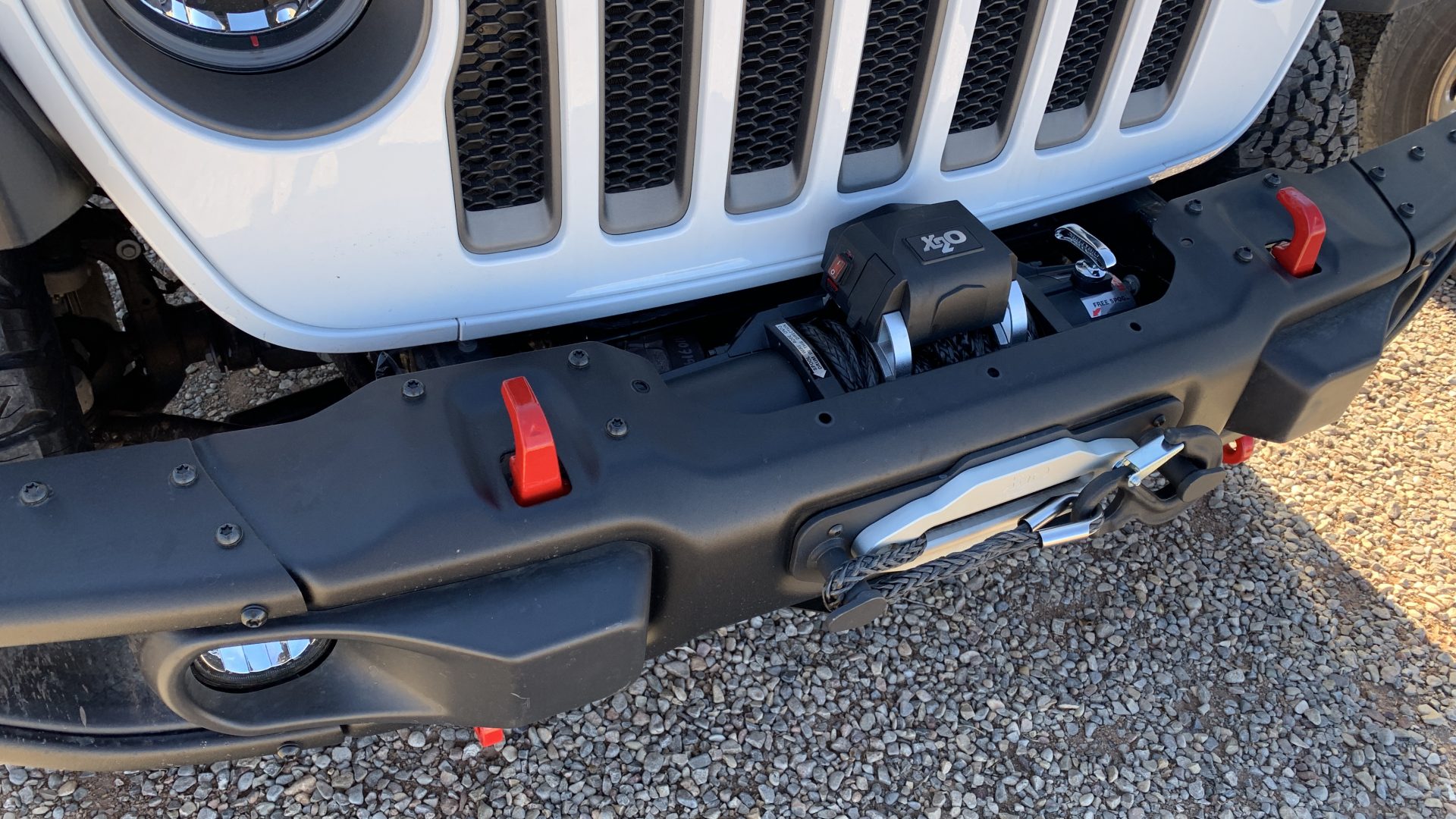 UPS delivered the winch plate and tow loops yesterday, meaning I could finally move forward with this install.

The tow loops are for hooking up and flat towing the Jeep, and I ordered them in red as they match the accent color for the recovery hooks on the top of the bumper. In the photo, they’re the red hooks that are located below the bumper.

The install of the tow loops requires drilling a 1-1/2″ hole on each side of the bumper and on each side of the skid plate, and using an angle grinder with a cutoff wheel to meet the edges of the cut. That allows the tow loops to pass through what would otherwise be a solid obstruction. It’s a fairly simple process, but when I went to use the brand new 1-1/2″ bimetal hole saw I ordered from Amazon, it jumped around instead of biting and scored portions of the bumper that weren’t intended. Upon inspection, the pilot bit had a notable bend in it, so this – though well reviewed – was either defective or just cheap junk.

I ran down to Lowes and purchased some flat black enamel and a new bit, and finished the process. The cuts didn’t come out as nice as I would have liked but they’re on the bottom of the bumper and hidden from view – you can only see them if laying under the vehicle. If I had a garage (and a vise) I would have taken a lot more time and made cleaner cuts, but working on vehicles is against the rules at most parks (for good reason; including this one) and I was rushing with the power tools as to not gather attention or annoy the neighbors. I coated the raw metal exposed by the cuts with the enamel I picked up at Lowes.

After fitting the tow loops and winch tray, and reinstalling the bumper, I moved on to installing the winch. I ran into a snag here in that the winch needed to be bolted up from the bottom through the tray, but I couldn’t get the bolts into the holes in the tray with the bumper installed. I ended up pulling everything partially apart to get the front two bolts threaded into the holes, then made a whole lot more work for myself trying to snug them with a wrench in a cramped space. With the winch finally mounted, I spent a while struggling with the backing bolts for the fairlead and anchor because they’re difficult to reach and by this point, the temperature dropped to freezing and it was a wintry mix out, so my fingers were too cold to work properly. If this would have come with instructions I assume they would say to do all of this with the bumper and winch tray off – but in my case, instructions weren’t provided and I figured this out the hard way.

Finally, with all the hardware installed, wiring up the winch just took a couple minutes and I zip tied the cords out of the way in the engine bay. Since the only wires happen to be to the battery, and the rest of the winch is managed via a remote that plugs directly into it or via wireless, this part was easy. I started up the motor and spooled the line onto the winch, locking the hook into the anchor. Last I installed the license plate bracket I bought.

I think the final install looks really good and I’m glad that I chose the Maximus-3 winch hook anchor and stealth license plate bracket, as they make this a lot cleaner than most other installs I’ve seen. I love the fact that Jeep made a bumper that is modular and capable from the factory to accept accessories like this one – even though it does come at a $1295 upcharge which can buy a nice aftermarket with the same capabilities.