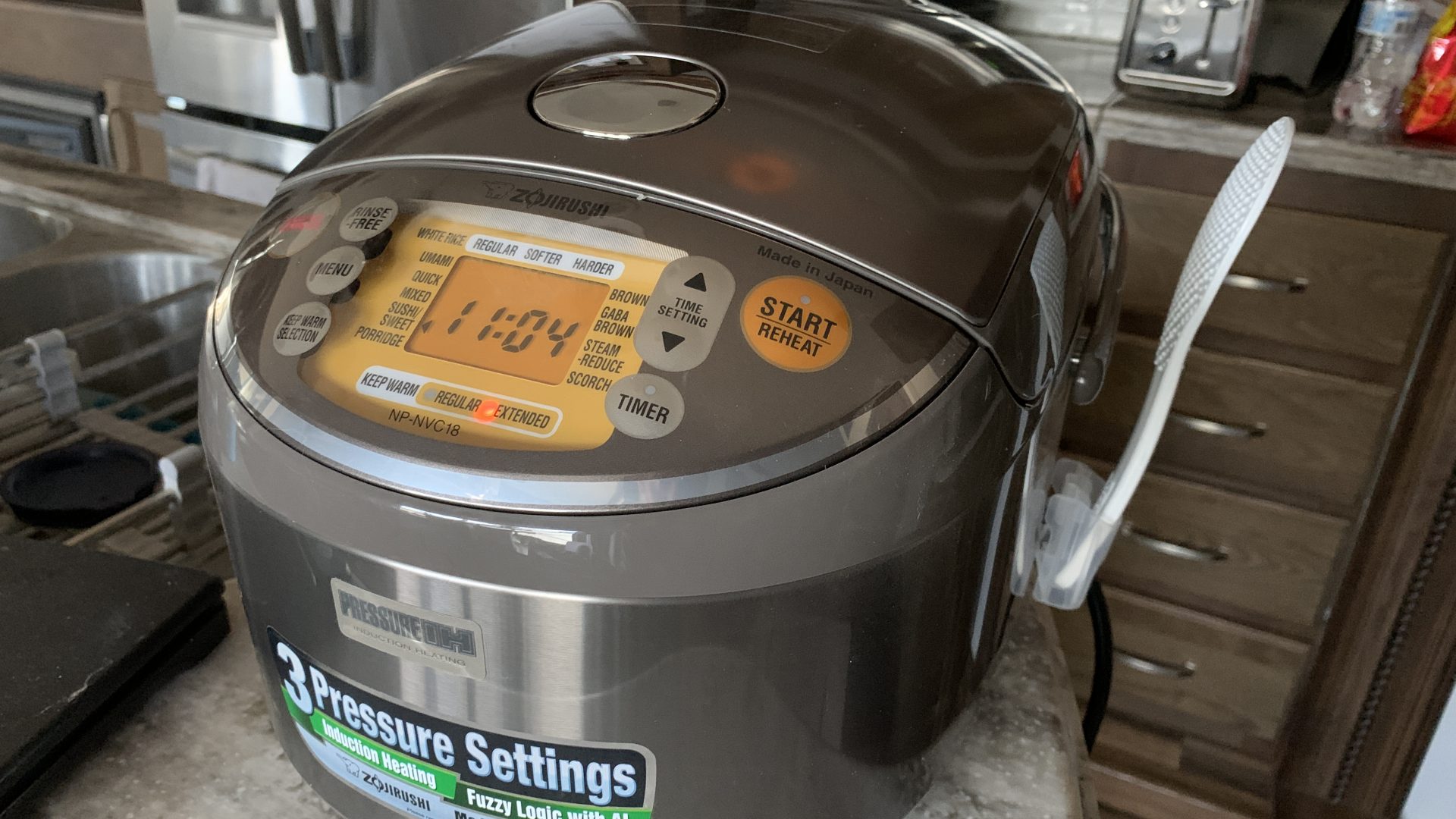 We follow a 70:15:15 vegan diet, which means that roughly 70% of our daily calories come from carbs, while 15% come from fat and 15% come from protein. Most of our carbs come in the forms of fruits, breads, and pastas, and to a lesser extent, rice.

We actually love rice, but want more variety than you find in the instant boxes. The rices like you find at Chinese, Japanese, Thai, and Indian restaurants are the rices we’d really like more of, and we usually get take-out about once a week just for those.

We have an Instant-Pot that we rarely use in the RV, because despite the cult following it hasn’t really lived up to our expectations. And we had a cheap rice cooker at some point, but it turned most rices to mush and was difficult to clean. Cooking on the stove seems to never result in the same rice twice, and can be very time consuming. A high-end Japanese rice cooker has been on our radar for a while, but we weren’t willing to sacrifice the space or money for one. After finding the best plain white rice we’ve ever had at a local restaurant here, we decided to take the plunge and see if the Zojorushis really are that much better.

Zojirushi, Tiger, and Cuckoo seem to be the popular rice cookers, with Zojirushi being the one you hear the most about. After reading and watching lots of reviews, we chose one of their higher end offerings, the NP-NVC18, because it has the ability to make set it and forget it GABA brown rice, which sets it apart from the competition. It runs a few hundred dollars.

Just for curiosity, I checked prices at Walmart and found that standard long-grain enhanced rice can be as little as 2.7¢/oz. Instant rice of the same brand and type is 13.3¢/oz, around five times more. Boil in bag rice is even higher per oz. While we’re still talking about very small amounts of money per ounce of rice, over the long term, the savings can stack up to offset the price of a rice cooker. For fun, I ran the numbers and it looks like it would take around 200lbs of rice to offset the cost of the rice cooker using the above numbers. At 13.3¢/oz for instant rice, we’d pay $425.60 for 200lbs but at 2.7¢/oz we’d only pay $86.40. According to this site, Americans eat 26 pounds of rice per year and Asians consume 300 pounds per year. I figure as vegans with a carb-heavy diet, we’ll fall somewhere in the middle and might actually see this pay itself off in a year or two. That isn’t why we’re buying it, but it does help to make us feel better about the cost.

The cooker arrived yesterday and I tossed about five cups of Calrose rice in, added water to the suggested line, and pressed start. About an hour later the machine started singing (it sings at the start and end of the cycle) that the rice was done. In the past when we’ve made Calrose rice it has been in a pan, and while it has come out well, the grains always kind of melted together. Calrose is supposed to be somewhat sticky, so I always assumed that was just how it got its stickiness. What came out of the rice cooker was somewhat sticky, but all of the rice grains were distinctly separate and the cooking was remarkably even. We paired the rice with some homemade General Tso tofu for some “fake-out” and it made for a delicious meal. We had quite a bit of rice left over, so I put the cooker in extended warming mode. Checking it this morning, the rice is every bit as fresh as it was when it was made yesterday. Being in an RV, I’m not sure we’ll keep it out on the counter or table all the time – but in a house with the sufficient counter space, the extended warming setting would be great to have.