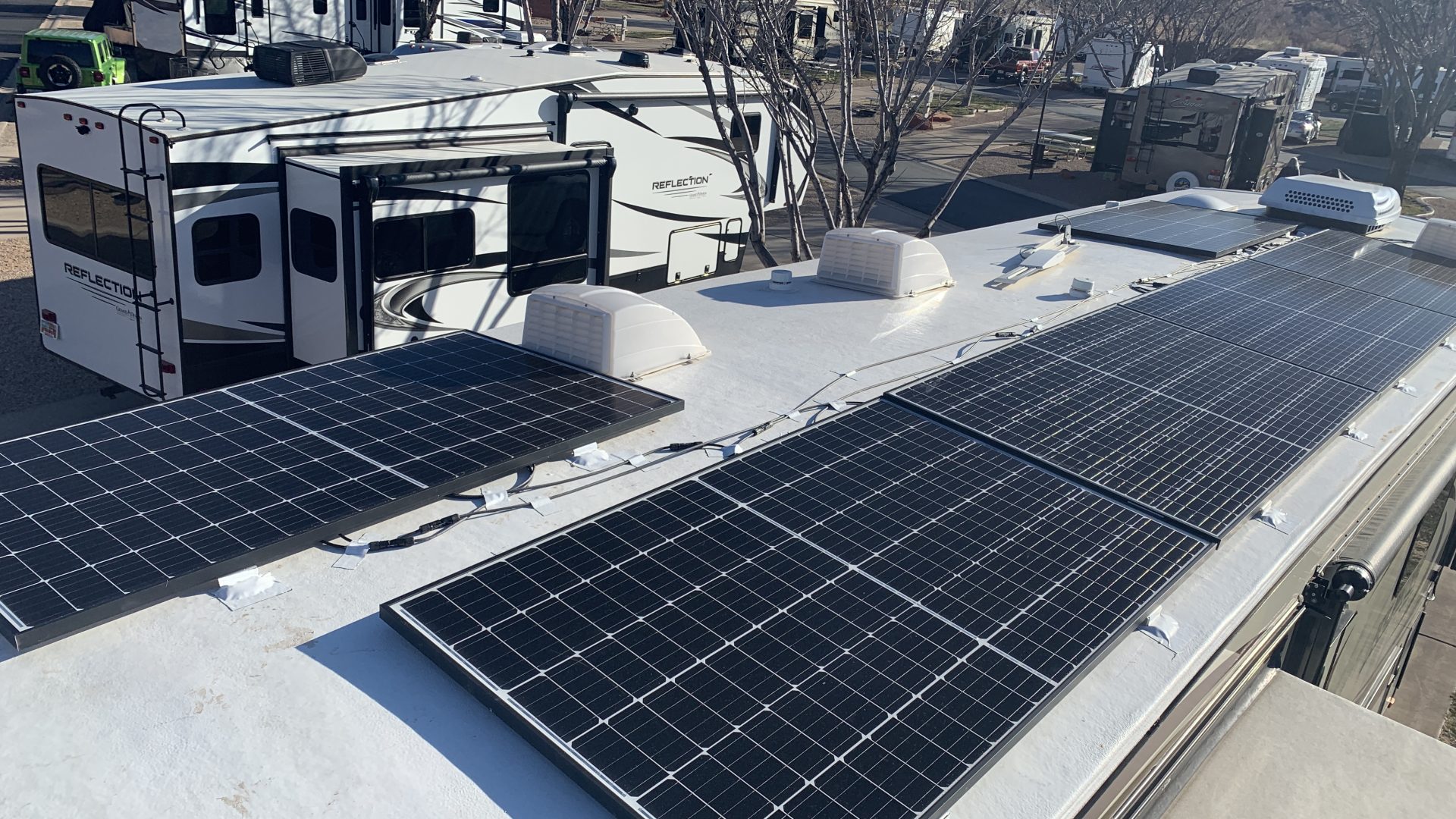 It took us three very long days to install solar, and another day or two to finish and program it. That’s a bit longer than expected, but working in cramped spaces and making sure we did everything properly were top concerns. I spent a lot of time just looking for tools and objects I laid down, because you can’t organize well when you have to fold like a pretzel to fit in your installation area.

It’s an understatement to say I’m ecstatic about how it turned out. I had a fair amount of electrical experience working on household electrical, datacenter electrical, and a little bit of RV electrical, but mostly within the scope of a heavy DIYer. I put together a basic design for a system, discussed it with a company who offered me advice on different components I didn’t know to consider, and came up with an improved final design after several iterations. They provided me with the parts and a schematic for the final design, and sent me on my way.

I highly recommend talking to James at Northern Arizona Wind and Sun if you have a project like this. He understood that I had a certain design and requirements in mind and patiently worked to augment it without taking over the project. Exactly the kind of vendor I want to work with for projects like these. The pricing they gave me was very reasonable, better even, than other vendors I looked at.

Phone support was included in the purchase, but since I installed the system on a weekend when they were closed, I didn’t use any of it for the actual install. I came across a few roadblocks that slowed me down, but nothing that I couldn’t work through after racking my brain a bit. I began the install on Friday night and worked late; by Saturday afternoon we were to the point where we were ready to move the shore power and load center cables over to the new hardware. We swapped them over, stacked the inverters, and brought the system online in a slow and controlled manner checking everything meticulously before throwing each breaker.

We drove in to Zion the next day, and once we arrived I continued the install. At this point it was mostly cleaning up the cabling, wiring up the generator, and beginning to program the system. Monday I called James at NAWS to discuss relays and programming a bit, and once I understood how the relays worked on the Victron units, got the generator auto-start wired up and he pushed the appropriate configuration changes remotely. We played with the generator a bit, but ran into issues with it that required a setting change that required a passcode Victron doesn’t provide freely, and we each left to try and track it down. I was able to obtain the code later that night via a Facebook group and push the change, enabling the generator input. At that point I found some issues with my programming and spent most of the evening and bits of the next day tinkering with it.

When we’re on shore power, I wanted to have it configured to use solar and stored solar power instead of shore power, only using shore power when necessary to support the load or charge the batteries.

For loads, I settled on using 50W shore power (to prevent backfeeding, we always want to accept a small amount of shore power), then using as much solar as available, then using battery power (if batteries are above 75% state of charge), and supplement any remaining needs with shore input. For the above example, the 1818w load is using 47w of shore power, around 1000w of solar (some of the solar being used for the DC loads), and the rest of the power needed for the load came from battery.

If the battery drops to 75% SOC, then the AC loads are powered by solar, then shore power, while the batteries are managed through an algorithm you can read about here.

Tonight the batteries dropped below 75%, so the batteries are no longer being used for AC loads. They’re still available for DC loads but will be actively charged from shore power if they drop below 70%, up to the 75% mark. They will remain around 75% waiting for solar to charge them to full for 24 hours. If they aren’t charged to full within 24 hours, they will be slow charged from shore power to full. It’ll dynamically change the 75% goal – my baseline – daily – in attempt to obtain a full charge each day based on data at hand.

Off-grid, the system is configured to allow the batteries to discharge to 20%, while powering all loads off solar, then battery, with excess solar being stored in the batteries. If the batteries drop down to 20%, the generator automatically starts to top them off, then stops when they are full without any interaction.

This means that things like our thermostat are always available and working, and if for example we leave the dogs in the RV and it begins to warm, the AC can kick on and cool it regardless of whether we are connected to shore power. The HVAC will consume solar, battery, and then generator in that order – all without intervention. That isn’t something we’re using alone to protect our dogs in the hotter months, but it’s another tool in the arsenal to make sure they remain safe.

Victron has some really nice reporting that we’re going to be able to utilize to better tune our consumption. We’ve been starting an energy audit – using devices and seeing how much power they use – so that we can begin to accurately budget our usage.

They provide an online portal you can enable and utilize to manage your system from anywhere, view data points, etc. Most of those data can be realized in graphs, like these:

Victron seemingly has almost the entire market share of higher end solar deployments in RVs, as there really isn’t anything out there that competes with it (possibly Magnum; and even though Victron isn’t specifically designed or marketed for RV use, it’s particularly well suited). A lot of people go with 12V systems and Multiplus inverters but they end up with a less scalable, less efficient system, all in effort to maintain the 12V system they’re used to working with. I’m really glad that NAWS recommended we look at 48V systems.

We did a few other things different than most RVs, from what I can tell. We don’t see a whole lot of residential panels out there, and we don’t see hardly any autotransformers – one of my favorite parts of the system. Where a lot of deployments use two inverters like ours, one on each leg, they also have each inverter powering a specific set of breakers on the load center and manually balance loads or breakers across them to avoid overtaxing. We opted to use an autotransformer to balance the load, so that we can fully utilize the inverters. In a typical use-case, you might end up with a 2400w load on one leg and a 100w load on the other, leaving one inverter working heavily and the other inverter hardly working at all. With the autotransformer, that same load is split evenly with around 1250w on each inverter. That allows us to use more power than one inverter can supply on a leg, and keeps us from having to worry about what leg each device we’re using is on.

This was a substantial investment for us and we don’t expect it to pay off for a few years. We’ll receive a large tax credit next year, which will certainly help. The primary goal of this system is to substantially increase accommodation flexibility and decrease our carbon footprint, not to reduce costs, and I believe it will handily accomplish those goals. The cost savings are an added benefit, but might be a major driving factor for others. This does, in a way, invoke thoughts of Vimes’ Econimic Theory for me.