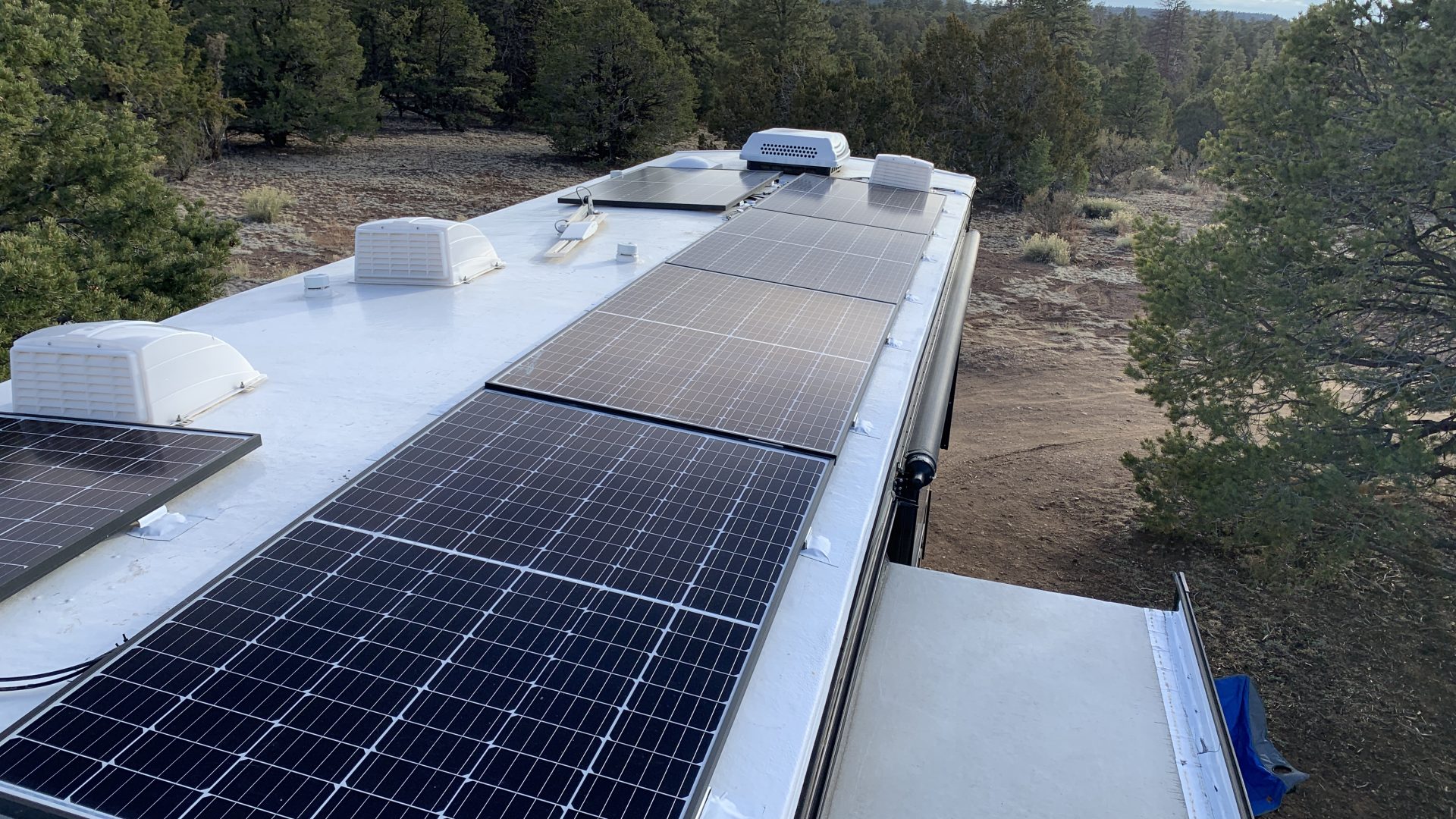 We’re dry camping in the Coconino National Forest outside of Flagstaff, Arizona. A few weeks ago I ordered a fourth SimpliPhi 3.8kWh battery for our solar setup and dropped by Northern Arizona Wind & Sun to pick it up and install it this week. That brings us to a total of 15.2kWh in our 48V battery bank, or 12.16kWh usable at 80% DoD.

This week is a colder week, so we’re not having to run air conditioning but the furnace (and its fairly power-hungry fan) is running a lot. Other than that, we’re living like we normally would.

Our power utilization here has been remarkably consistent, at around 6kWh per day.

The colors in the graph indicate the source of the electricity being used – blue is from battery, yellow is direct use from solar, and green is from the generator. I’ve run the generator a couple times for reasons related to the addition of the new battery (calibrating the battery monitor), so the little bit of green is from that. If we were using shore power, that would have been displayed in red. Today we will have used a little more power because Kelly was baking in our electric convection oven – something that at face value seems like it would be very difficult to do on battery power.

Similar to our utilization, has been our solar production.

We’ve also averaged around 6kWh per day in production, more or less breaking even. Today we had an exceptional solar yield of 8.43kWh, likely due to the fact that we had the capacity in our batteries to store power rather than making it to 100% halfway through the day. So again, we’re more less breaking even on our utilization and solar production.

With an average usage of 6kWh per day, that gives us two days of living “normally” on our battery bank alone (no solar production), which is sized to comfortably provide 12.16kWh of energy, in these conditions. If we’re having to run the air conditioning, that would be different.

If you visualize the batteries as a fish tank and use gallons of water instead of kWh, basically this is what we are working with:

We’ve been gathering some other figures, so jotting those down:

I’ve been using the fish tank analogy a lot – it helps people to visualize things and I think works rather well.

This week has been really successful for us – I don’t think we’re going to need to run the generator at all. Last month, we received nearly half of the $100 electrical deposit we placed on our site back, with only a ~$60 electric bill. That’s down about $240 from a similar site in similar weather, and the same electricity rate, back in December.

We’re enjoying it out here and looking forward to more dispersed camping – tanks are still an issue, but we’ll get all the workflows ironed out and be able to utilize the system to its full extent in the near future.