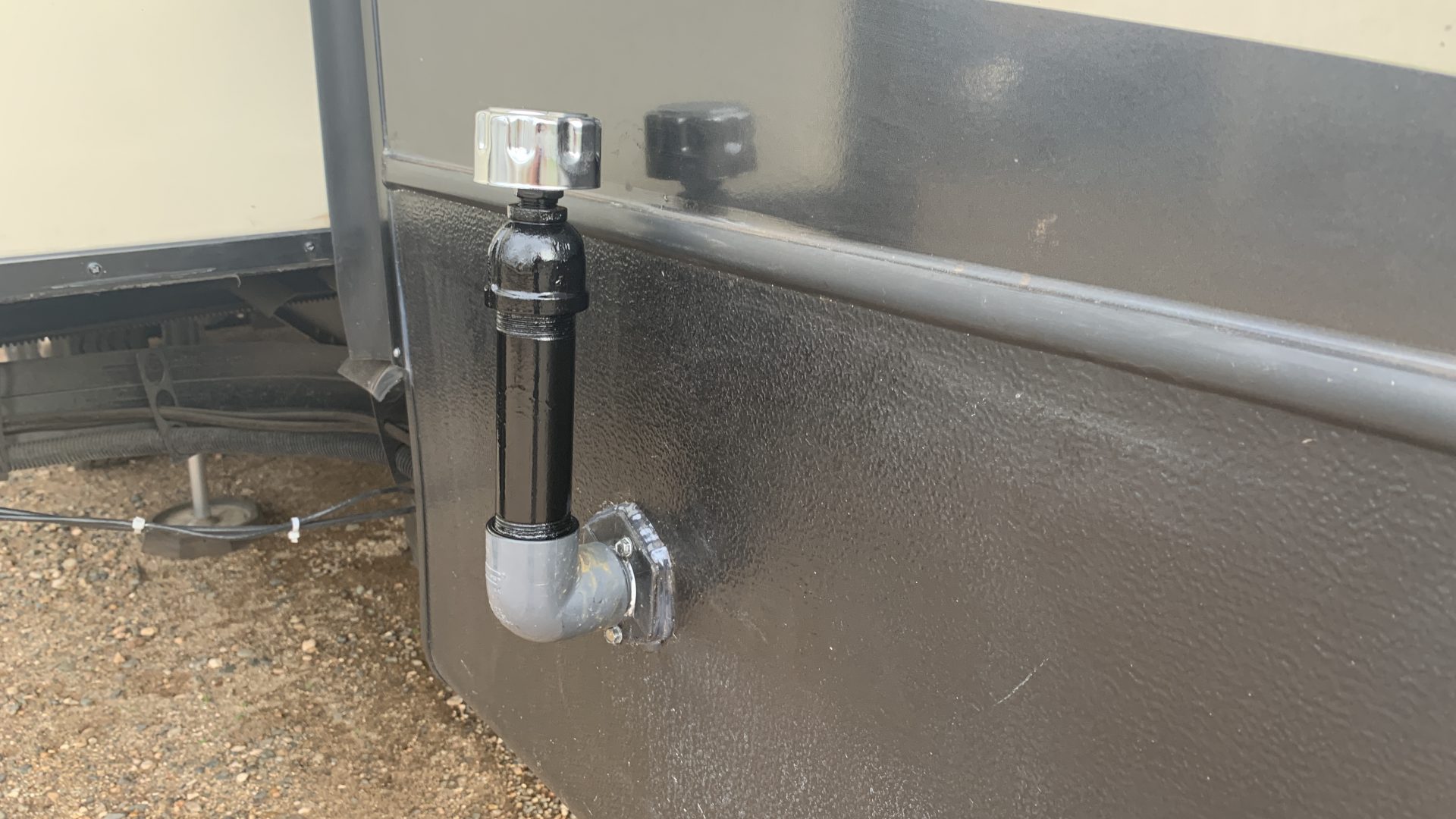 This first week off-grid has been a great success. We are still trying to fine-tune the rig so that we can comfortably spend a week off-grid without issue, but we’ve solved most of the issues with our solar install, tank monitors, and other upgrades.

We always knew that we’d have to give up consistent showering off-grid, which wouldn’t be such a big deal if we weren’t always running or cycling. I try to run at least six miles each day, and sponge baths nor shower wipes leave us feeling particularly clean.

We ran out of fresh water on Tuesday. Our RV’s freshwater tank vent is a really poor design – the vent hose connects 2/3 up the tank and is a straight shot out the side. That means that if we try to fill the tank full, water starts pouring out at around 2/3 tank and then, when we go down the road, more water comes out during turns. At some point, I tried to address the issue by replacing the hose with a longer hose that had a loop in it, but it just seemed to create a siphon and actively dump water out of the tank. Before driving down here from Utah, I added a ball valve to the hose (which was difficult to get to) but the fittings leaked – I wasn’t able to find one with the right OD for the 1-1/4″ ID hose, and had to rely on clamps to hold pressure on a slightly too small valve, which failed. According to our tank monitor, we arrived with only 45% of the tank full.

My latest attempt is to replace the vent on the outside with some off-the-shelf aquarium and plumbing parts, to raise the vent above the tank. I don’t see how it won’t work, but won’t know if it does for sure until we move to Cottonwood.

It’s not the prettiest, but I tried to pick components that matched the RV pretty well with the knowledge that I could always paint them. The assembly sticks out from the RV about 4″ due to using 1-1/4″ pipe, but there is no way I want to be that close to anything, anyway.

Our RV is configured with a 50 gallon freshwater tank, 12 gallon hot water heater, and marketed to have a 66 gallon freshwater capacity. I assume that the other four gallons is in the lines. Back in 2016, I purchased a 45 gallon water bladder and a small transfer pump. I’ve never used it, but when we ran out of fresh water on Tuesday, I pulled it out and filled it for $8 at a local RV park. I used the pump to fill our freshwater tank twice with it, using roughly half the bag, before it started pouring out the vent. I added the other half today, and then rigged up my makeshift vent mod afterwards.

I now know that we need to bring freshwater in, in fairly large quantities, especially if we want to shower regularly. An educated guess based on showerhead flow and tank level changes tells me quick military showers for both of us uses around ten gallons, so a week would require at minimum 70 gallons of fresh and and 70 gallons of grey water capacity. Some of that can come from the existing fresh water supply, and about half that can go into the grey tank and still leave room for the bathroom sinks.

I’ve carried a Barker tote for years, which is a portable container for wastewater that is on pneumatic tires and can be towed at very slow speeds behind a vehicle. We’ve used it when staying in campgrounds without sewer hookups at all sites, but it’s not going to work for us when we might have to travel to the nearest town to use a dump station, and don’t want to move the entire RV to empty the tanks. I’ve also purchased a macerator pump for the septic output, which I used to dump the tanks through a garden hose at the house, when we lived in a sticks and bricks and had our sewer cleanout easily accessible in the yard.

My first thought was that I could continue to use the portable water bladder I have, and use the Barker tote by putting it in the back of my truck and pumping into it using the macerator pump. There are a couple problems with this plan: first, I believe the Barker tote is only around 32 gallons and we have a total of 160 gallons worth of tanks; second is that we store it under the RV and it is a huge pain to get to. I remembered a blog post I read a couple years ago, where someone had a custom bladder made, and decided to contact the owner and see if he still likes his solution. Turns out he highly recommends it and has used it for thousands of gallons without issue.

My original thought was just to buy a septic bladder custom sized to fit the bed of the truck, but after further thought, decided to ask for two bladders. A 50″x66″ footprint is ideal – it fits between the tailgate and the toolbox, and between the two wheel wells, with a few inches to spare. I have around 20″ of height to work with if I want to close the tonneau cover. Running the math, I came up with the following:

The two bladders would fit side by side in the truck bed in the desired footprint, fit under the closed tonneau cover, and provide plenty of storage to transfer all of our grey/black tanks into as well as plenty of freshwater storage to ensure our fresh water is kept full, and minimize the fees for filling freshwater and dumping (which gas stations and RV sites provide, for a fee). They would also be incredibly convenient – I’d have to make one trip a week, instead of several, and we’d be able to use water almost as if we are on full hookups. That’s exactly what we’re looking for and the last piece of the puzzle.

I reached out to Husky Containment and am waiting for a quote back for the custom dimensions I’m wanting.