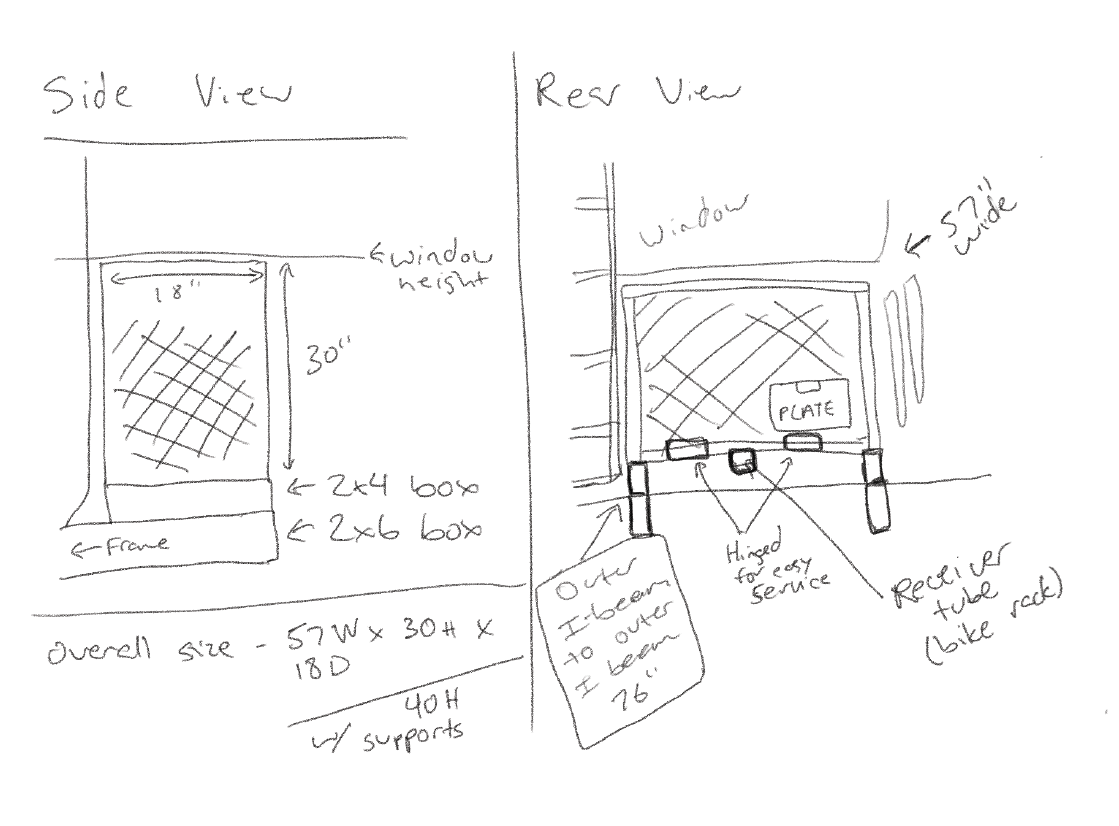 I mentioned in some of my prior posts that air conditioning on solar, to a large extent, is a losing proposition. That is still very true, but with summer coming, I may attempt to address it.

RV AC units a horribly inefficient – our two AC units draw around 2.7kW when the fans are on high and the compressors are going. They don’t have any mandatory efficiency requirements and are probably pushed to market with minimal concern and/or testing. I ran a few quick numbers and figured it would take 10kW of panels and almost quadruple our battery bank for us to comfortably run our AC all day if in very hot climates – numbers that are impossible, or at least extremely difficult to obtain, with limited real estate, storage, and weight capacity. With those numbers being out of reach, the next option is to look at more efficient AC options and travel to cooler climates to offset the rest.

Mini-split AC units are among the most efficient out there. They’re also fairly well suited for RV installations, as long as you can find a place to locate the condenser. They consist of an outdoor unit (condensor) and one or more indoor units that have small “line sets” that run between them. You run power along with the line sets. While a few installs I’ve seen have been able to make use of compartments under or around the RV, the only one we have that might be suitable would be difficult to reconfigure in such a way that it would provide adequate ventilation to the unit. The other option I’ve seen a lot of is mounting them on the back. I spoke with someone who also has an Alpine, with mini-split units, and that is what they did:

In our case, we use that location for a bike rack, and would like to retain that functionality (though we could potentially move it to the Jeep). I also don’t want to add a ton of length to the rig.

If we move forward with a mini-split unit and decide to mount it there, I might have a custom rack made and welded or sturdily bolted directly to the frame. I’m not really happy with the solution that the other Alpine has, as I would want 45° struts for ground clearance. A starting point might be something like…

… but not quite as drastic. Then, I think it would be a good idea to build a tray that runs a bit wider than needed to provide some additional storage, possibly wrapping the entire thing in expanded metal to provide protection and storage, while still allowing tons of ventilation.

Move the license plate to the end, and put a receiver tube on it so I can still mount bikes there. After a bit of thought and a tape measure, I came up with this design:

Being that these AC units run less than a hundred pounds, and the bike rack with two bikes would also weigh less than a hundred pounds, the mount wouldn’t have to be quite as substantial as something like that motorcycle lift. We would also be shedding the AC units from the roof, and adding solar panels in their place. We could comfortably fit another 975w on there, for a total of 2925w. I just need to find a mobile welder who will build that for me relatively inexpensively.

To effectively cool the RV, we need two 12K units or at 24K BTU at minimum. That’s based on the fact that we currently have 30K BTU, but with units that lose a lot of air due to shoddy venting and poor efficiency – and online reviews where people have replaced their 15K units with 12K mini-splits and claim that the 12K splits provide much better cooling. My thoughts are that RV ACs don’t actually produce what they claim. We also need that amount of cooling because we will have to cool the two zones separately – one for the living room, and one for the bedroom.

We have a lot of options, but two we’re specifically considering. Each have pros and cons.

The first option is the most efficient one. It is using native 48V DC splits, which are much more expensive than conventional 240VAC splits. They’re more difficult to source, to find parts for, and to get support for. However, they are about 20% more efficient than a comparable 240VAC unit because they do not need to convert 48VDC from the batteries through our inverters to 240VAC, and then back to 48VDC internally. They natively accept the 48VDC and utilize it. Aside from the expense and difficulty sourcing these, I can’t find a single condenser unit that will suffice for our needs, so I would need to have two 12K condensers. Each condenser is 34.92″ W x 25.39″ H x 13.98 D and weighs 92lbs, so I would have issues finding a suitable location for them and mounting them in my enclosure would not work. Weight is also a factor. I love the idea of gaining an additional 20% of efficiency on top of the efficiency gains by moving to a mini-split, but I don’t believe that outweighs the negatives.

The second option would be a much easier to source, off the shelf 24K BTU 240VAC condenser unit that supports two indoor units (dual zones). These are easy to come by from many major brands. I’m not sure why the weight varies so much between these two units, but here are the specs for a couple 24K condensers that would run the entire rig with a single unit.

Either of these two units should use about 50% of the electricity that our current units do to cool the same area, and further, would allow us to actually target areas for cooling – we could cool only the bedroom at night, saving tons of energy in the critical hours that the sun isn’t out.

As a final note, neither of these solutions would be possible if we didn’t upgrade our electrical in the manner we did. Even though 50A RVs do have 240V split phase service, it isn’t accessible at the main panel and would require modification. More significant, however, is that the Onan generators they put in RVs do not provide 240v output and that a lot of campsites only provide 30A, single-phase power sources and you can’t get 240V from them. The 240VAC units would unusable at lots of campgrounds, as well as unable to run on most generators. Similarly, most RVs don’t have any 48V power sources which would rule out the first option.

They do make 120VAC 12K BTU units, which would be a nice alternative if those are the restrictions you are working with.