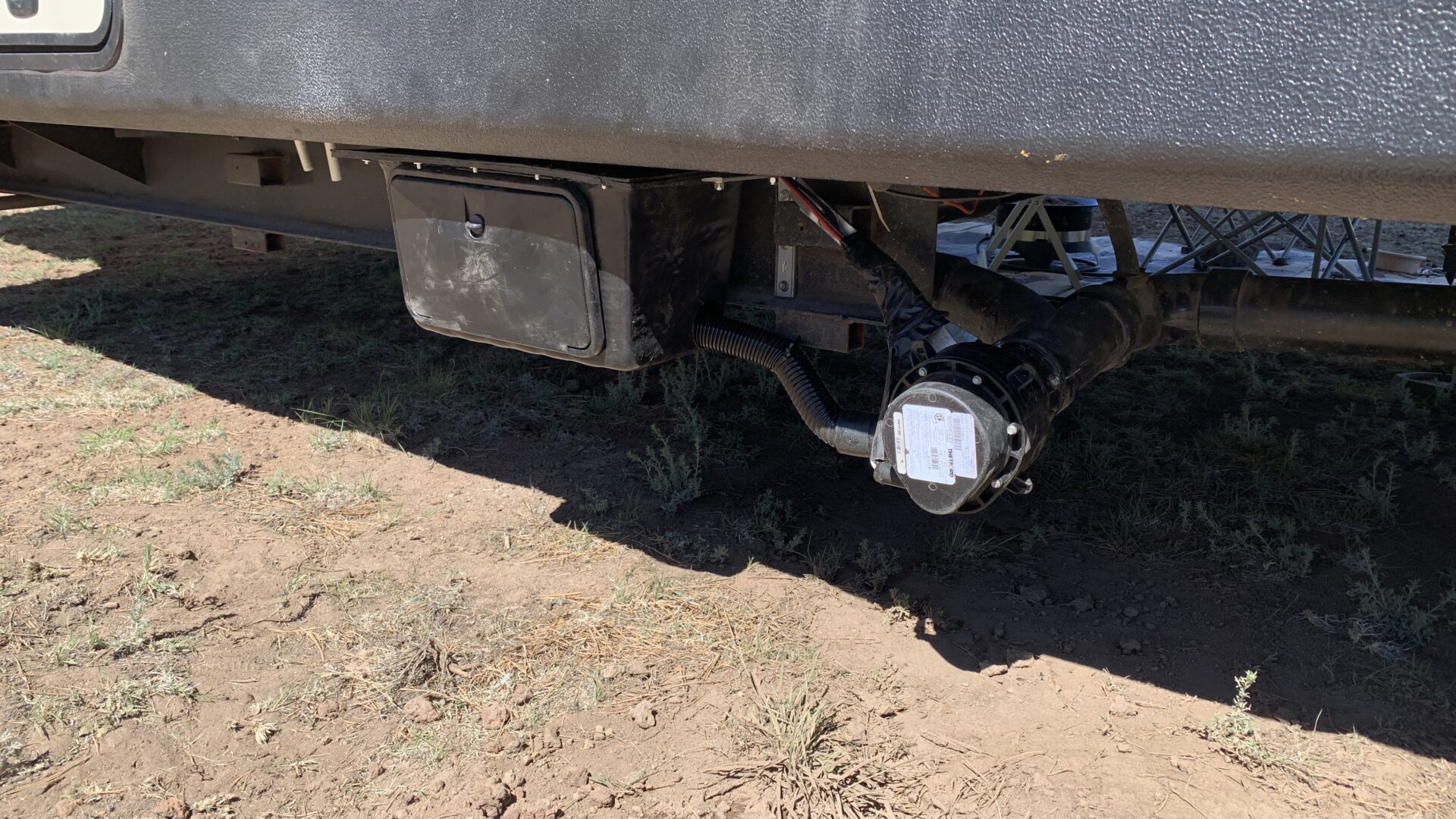 During our shakeout trip outside of Flagstaff, my FloJet macerator pump gave me enough issues to where I was ready to throw it in the trash. I ended up ordering a Sani-Con Turbo 400S, and am going to keep the FloJet as a backup or a tool to help other people avoid moving their rigs just to empty their tanks.

After going into town and tracking down the pump – an ordeal because the FedEx office said they’d accept non-FedEx packages on my behalf over the phone but in reality, they rejected the package this morning and I had to track down the UPS driver – I came back to the site to get it installed.

The installation was pretty straightforward, but I had some leaks at the clear bayonet extension I installed so opted to remove it. Thankfully I was testing with greywater.

The pump is “permanently” attached to the output pipe via a bayonet fitting, but I added two roofing screws with sealing washers to further secure it, and a heavy pipe strap to support it and remove any remaining movement.

A 1.5″ pipe comes out of the pump and leads into a box that I mounted to the frame.

Inside the box resides the hose and nozzle assembly that are permanently attached to the pump, and in turn, the rig.

In theory, the process to empty the tanks is just to grab the nozzle, place it in the sewer inlet or attach a hose to it that goes to a cleanout somewhere, open the appropriate gate and turn on the pump. They advertise it as capable of pumping uphill, and it does, but they obviously didn’t think through the design with that intention.

In practice, when you pump a fluid uphill, it stays in the hose and there is no way to get it back into the RV. Since you can’t disconnect the hose at the RV side, you can’t walk the fluid back towards the nozzle. It’s just – stuck – there. There is an adapter that screws on the nozzle to convert it to garden hose thread, and a cap for that, so in theory you can just cap it off, and call it good. In fact, that’s what I did. It’s not a great solution, as fluid still travels through the nozzle as you remove it and try to get the cap on, so not something I’m going to be willing to deal with moving forward.

All the hose is 1.5″ ID hose, so I placed an order at Home Depot for in-store pick up that consists of a 1.5 FPT to 1.5FPT ball valve, two 1.5″ MPT to 1.5″ barbs, a 1.5″ barb x 1.5″ barb, and 1.5″ x 2ft clear braid tubing. At the end of the hose where it meets the nozzle, I’m going to plumb in a few inches of clear braid tubing and the ball valve before the nozzle. That way I’ll be able to visually observe the state of things and close off the flow before removing or disconnecting the nozzle. That’s how it should have been designed from the factory.

All said and done, the process moving forward once I complete the above should be just to pull out the hose, connect it to the bladder, open the valve, open the gate, and turn on the pump. That’s far simpler and more foolproof than the old routine with the FloJet.