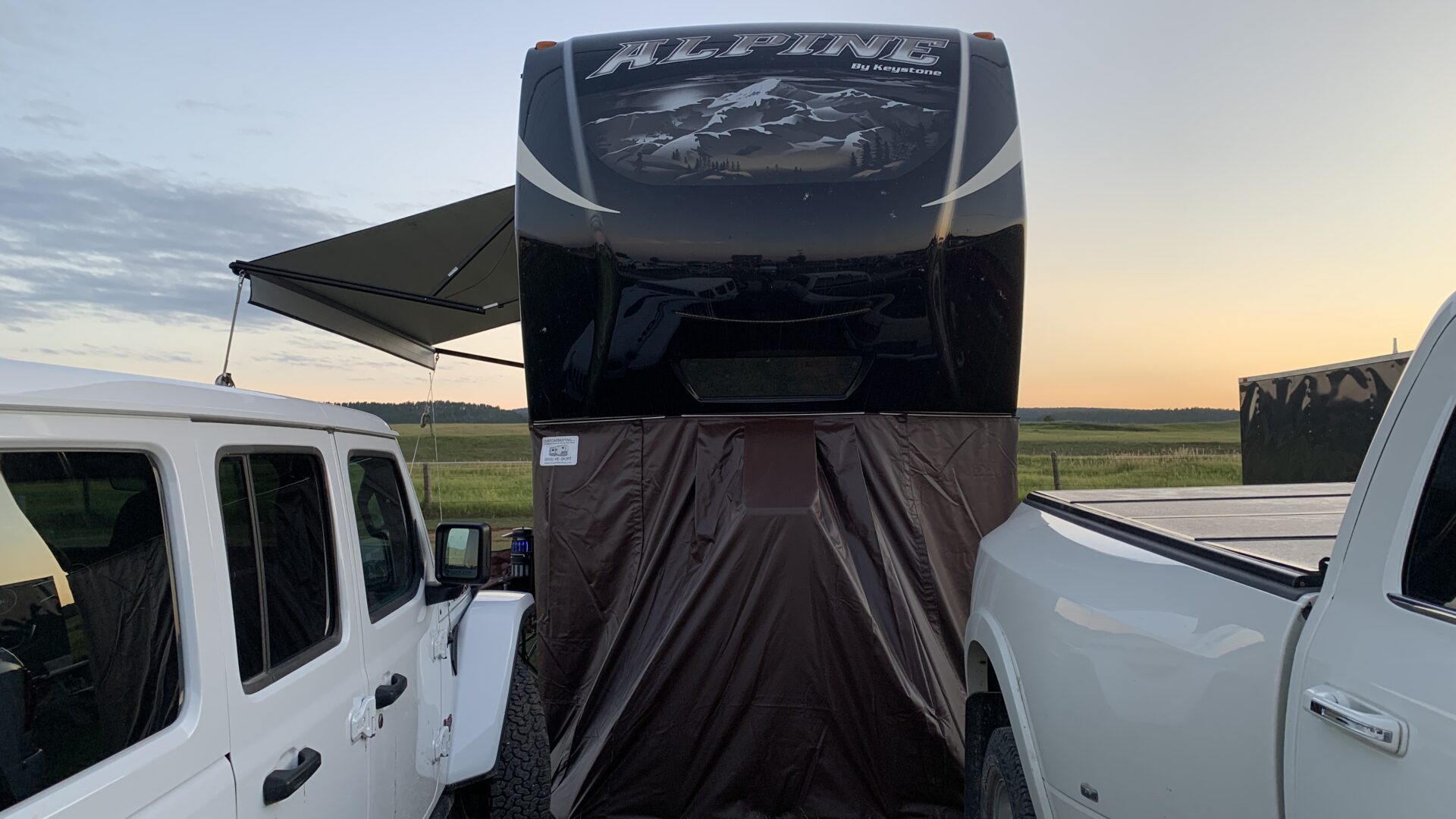 We’re in South Dakota, and opted to have www.customskirting.com come out while we’re here and make some custom skirting for us. We considered several skirting companies, but this one uses a patented channel system instead of snaps or turnbuckles, which sold us.

Aside from a few scheduling difficulties, they were quick and professional and did a great job. They have their own RV park you can stay at while having work done, but when we arrived it was full and they couldn’t be contacted, so we moved down the road to Three Flags RV Park who gave us very reasonable weekly rates and has been great to deal with.

We weren’t really wanting to stay at an RV park, but with a lot to do in Rapid City and limited boondocking options nearby, we made an exception to our park policy and paid for a few weeks at a private park.

Aesthetically speaking, skirting looks as nice as you make it look when you stake it down. I’m still figuring out the best methodology, but think it looks pretty good roughed in as in the photos. We chose the darkest shade of brown to collect heat in the winter, not show dirt, and match some of the tones in the swirls on the side of the trailer.

In addition to the skirting, we ordered Therm-A-Slides, which we have not installed yet. They wrap around your slides and provide a mechanism to hold up to 2″ foam board insulation.

All of the aftermarket modifications to our rig that pertain to energy, from the window treatments, to the roof, to the solar, to the HVAC, were designed or chosen for the utmost efficiency. For our efforts to have a completely self-sufficient off-grid RV, the skirting is a substantial attribute and should prove to be a significant factor in keeping temperatures regulated on solar energy alone once cooler temperatures roll around.

While the primary motivation for the skirting was to keep the rig warmer with less energy in the winter, and keep pipes from freezing, the additional storage room under the front cap can’t be overlooked. It serves as an approximately 6’x8′ storage shed that can house our bikes, grill, outdoor furniture, and anything else we want to toss under there. There is a 3′ wide zippered door for easy access. Speaking of access, they installed zippered panels and access doors everywhere we might possibly need to get to under the rig with the skirting installed.

In the photos, you might notice that our bikes are gone. We scrubbed them from the rear of the RV and added them to the jeep, using a RockyMounts BackStage mount. I’ll do a separate post on that later, as it’s a really neat rack that swings completely out of the way of the rear door. We also cleaned up the rear of the RV in general and moved the 4G/LTE antenna to the slide, using a split post with a removable top portion for travel. Having it on the slide addresses the pitfalls we ran into with the old design – mostly dealing with ungainly cables and bulkhead connectors that were causing damage to the slide. Similar to the bike rack, that will be a separate post later.