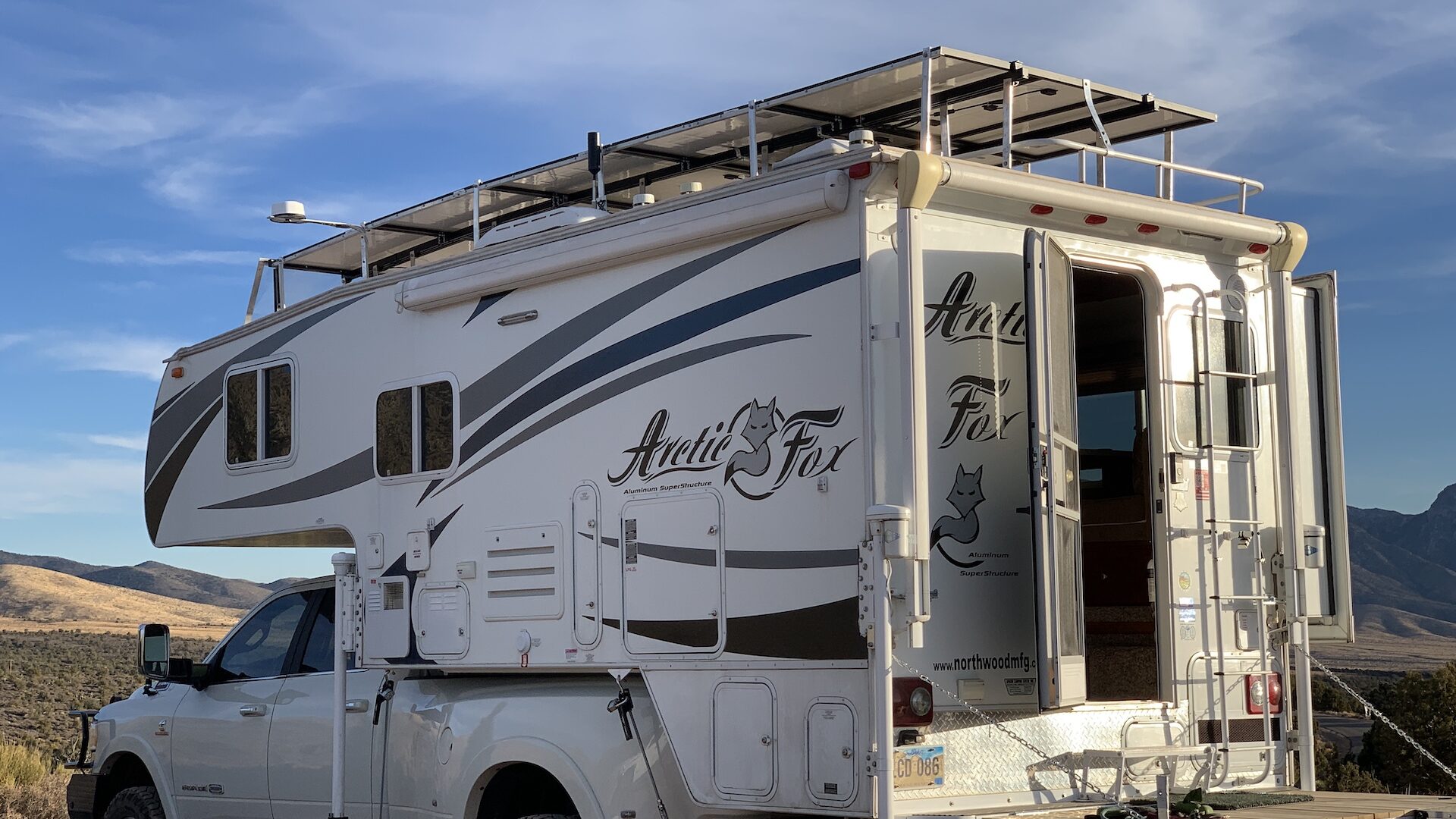 We wanted a TC to facilitate easier and faster travel in the NE, PNW, and for other trips where we have multiple travel days to reach our destination.

The AF1140 is one of the largest truck campers on the market, being in the 11.5′ class. It has a large full wall slide, but there are a couple triple slide models out there that have an upper edge when it comes to living space.

After extensive research and consideration, we decided we wanted a 2015-2016 AF1140 wet bath and started looking all over the country for one. We found two available, had friends in the local areas check out both, and bought one up in Washington sight unseen (by us) and had it shipped to Arizona. We narrowed down our search to that particular year range and model for the following reasons:

Moving to a truck camper meant getting rid of the tonneau cover we had on the truck and removing the 60 gallon aux fuel tank. We didn’t want to give up the additional fuel capacity, so ordered a Titan 55 gallon replacement fuel tank for under the truck. That gives us an additional 23 gallons over the factory 32 gallon tank.

It also meant modifying the suspension a bit to handle the 4000lb dry weight, which is probably closer to 6000lbs all ready to travel. We added a Hellwig 1-5/8″ sway bar and AirLift 7500XL bags with a remotely controlled air compressor. I built a custom bracket to locate that compressor, manifold, and my onboard air compressor inside the dually fenders under the truck. We also added Torklift frame ties and converted the tie downs that came with the camper to Fastguns.

Having a truck camper also allows for us to flat tow the Jeep behind us and to ride together – a huge advantage for travel days. That meant adding the Mopar harness and Roadmaster Invisibrake to the Jeep, a 4′ extension bar and Roadmaster Falcon AT to the truck.

We chose the inverter because it’s the same model we use (two of) in the fifth wheel. In hindsight, we wish we would have stepped up to the 5000VA model but we will make do with this. We’ve had it go into overload and send the generator a start signal (as programmed it to do) a couple times when running the microwave and AC at the same time, or other appliances simultaneously.

Outside of the rig, we built a rack that spans the length of the roof and mounted five REC Alpha series 360W panels on it.

The rack also turned out to be a great mounting point for our Panorama Mako 4×4 LTE antenna and WeBoost antenna (both pictured above).

After taking care of the solar, we built a deck on the back of the camper that folds down and has Torklift Stow-N-Go steps attached to it. We can fold down the deck and enter the camper even with the Jeep attached, but can’t fold down the stairs and have to climb on via the Jeep’s bumper.

Having the deck makes it infinitely easier for the dogs to navigate their way into the camper – and greatly enhances usability for us humans as well. It also services as a small expansion to our living space and can fit a pair of Cliq chairs if we’re careful not to knock them off with the door.

Today we installed a JC Refrigeration 120V compressor unit and threw away the absorption unit from the back of the fridge. The conversion has a several benefits for us:

We’re nearing the end of our planned build, but have a few final things to take care of. We’re going to do some reupholstery work in the near future, and are waiting on an Air Head composting toilet to ship. Once that arrives we’ll get rid of the standard flush toilet and combine our grey and black tanks for extra grey capacity.

We’ve put about a thousand miles on the rig over three weeks of living in it, and love it so far. There were a lot of smaller projects (RVLock keyless entry, mattress replacement, rekeying compartments, etc) along the way that we’re not bothering to detail here – but might come back to in the future.